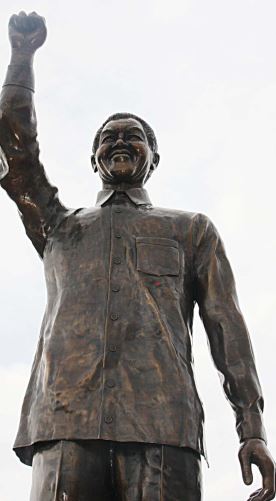 The 06th of December 2013 signifies yet another dimension in the history of South Africa. The city of Mangaung woke up on a sad note upon hearing of the passing of the stalwart, THE ICON, THE RECONCILER AND UNIFIER, uTata Nelson Mandela.

Executive Mayor, Cllr. Thabo Manyoni, said: We are saddened but also draw solace in the life of this hero who is an embodiment of peace and reconciliation. We also draw our source of strength from the leadership he demonstrated as the leader of the ruling party, and as the first democratically elected president of South Africa.

Throughout his life, Madiba embodied humility, selflessness and patriotism – characteristics which epitomise the values of a true leader.

The city of Mangaung has a long standing relationship with the father of the nation with a number of honours bestowed upon him over the years.

It is in Mangaung where the ruling party, African National Congress, which produced Mandela, was established. In 1997, the Mangaung Transitional Council bestowed the Freedom of the City to Dr Nelson Mandela. At the same event, the main street of Bloemfontein was named after this icon. In the same year, the University of the Free State conferred a PhD degree in Law to Madiba.

The city also recently took a bold move by erecting the statue of Nelson Mandela at Naval Hill Nature Reserve. It stands as the tallest statue of Madiba in the world. This is an indication of the importance of Madiba, THE ICON, THE RECONCILER and THE UNIFIER, in the life of Mangaung Metro.

Madiba falls within the category of distinguished citizens of South Africans and his unwavering courage and selfless service towards a better South Africa will forever be etched into our memories.
We join millions of South Africans in celebrating the life of this gallant fighter of our struggle.

The city will be engaging into a number of activities in honour of Madiba. Amongst others, citizens of Mangaung and the public at large are welcome to lay wreaths at the statue of Madiba at Naval Hill. There will also be a condolence book at the statue for messages of support which will go to the Mandela family.

May his soul rest in peace!

AT THE HEART OF IT ALL

AT THE HEART OF IT ALL

Our LOGO with Three Pillars and their respective Curves and Lines provides a reference to the City Skyline and Historical Architecture. The future is our Metropolitan City.

The Left ORANGE Pillar indicates Inspiration – Mangaung is both Changeable and Adaptable. The color of thought represents social communication and is therefore stimulating two way conversations. It aids in the assimilation of new ideas and frees the spirit of its limitations, giving us the freedom to be ourselves. At the same time it encourages self-respect and respect for others. It serves to be a warm and inviting color that is both physically and mentally stimulating to get people thinking and talking.

The BLACK Centre Pillar with Line indicates the Centrality – Mangaung is rooted as being in the Centre of South Africa. The color of authority represents strength, seriousness, power, authority and stability. It is a formal, elegant, authoritative and prestigious color that evokes strong ambitions. It’s precense creates a boosting confidence and also contributes by increasing the sense of potential and possibility.

The GREEN Right Pillar with Curve Line indicates Growth – Mangaung is growing towards a Future of Citizen-Centric Government. The color of life represents renewal, nature, energy and is part of growth, harmony, freshness, safety, fertility and the environment. It has healing power and is restful, relaxing and can help enhance vision and endurance. It is also responsible for attributes that brings hope, health, adventure, renewal, self-control, compassion and harmony.

With Bloemfontein, Botshabelo & Thaba Nchu already part of our Metro, the following Towns/Settlements are now incorporated into the Mangaung Metropolitan Municipality after the Municipal Elections of 3 August 2016.

We are incorporating all relevant information from different sources onto this Website, please feel free to send an e-mail if you do not find what you are looking for on this New Official Mangaung Metropolitan Website.

Compiled by the  Mangaung  Metropolitan  Municipality in accordance with the provisions of the  Promotion of Access to Information Act, 2000 (Act no 2 of 2000)